When we went on our Colorado bike trip John had an older Goldwing. It had saddlebags and a tour trunk. I liked the convenience of the trunk. With the Nomad it is nice to have the hard saddlebags, but as time went on I could see the added benefit of a tour trunk. You can't have too much lockable storage on a bike.

I kept an eye on Ebay to see what I could find. There are some Chinese-made ones you can buy for $100-150 but people who have them say you get what you pay for. Many people report cracking and rattling. There are also takeoffs from Honda Goldwings, Yamaha Ventures, and Harley Electra Glides and such. They tend to fall into two categories: expensive or junk.

I generally like the Harley Tour Paks better as the opening is more towards the top and you can pack more inside without it wanting to fall out. There are also more accessories available for them. They seem to be the Chevy small blocks of Tour Paks.

I eventually found one on Ebay I was interested in. It was 'new in the box' and appeared to match the blue on my bike. It also included the passenger backrest and tub liner. I won the auction and paid about half of what it would have cost me new. 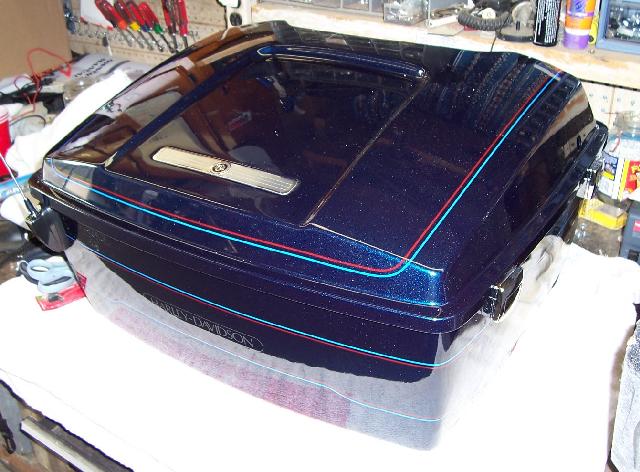 Here is the Tour Pak. It was a HUGE benefit the color matched the bike. Color matching would be expensive. The Harley color designation is "Jade Sunglo".

I bought a lid storage pouch and a luggage rack for it. I also ordered a lockset from the local Harley dealer. 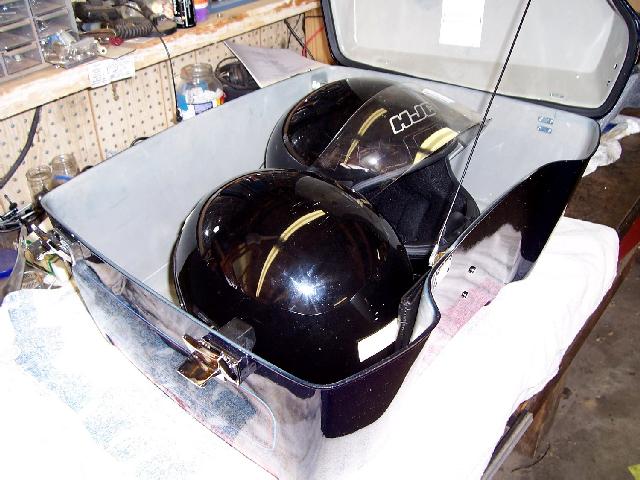 It holds two helmets with room to spare.

To mount the tour pak I bought a Wompus rack. To install the rack remove the saddlebags, sissybar, and shock bolts. 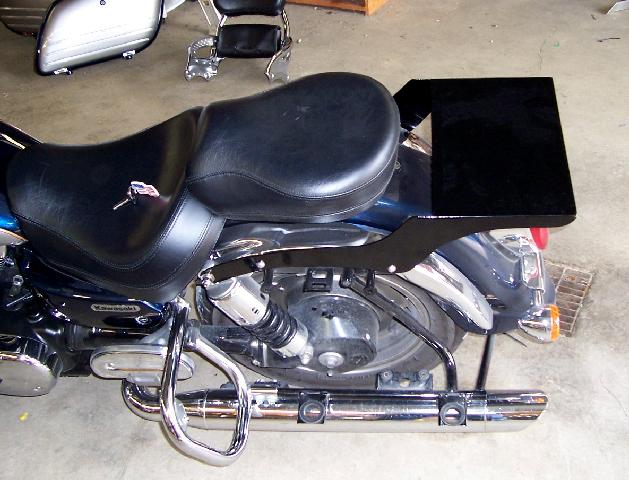 The rack fit perfectly using the shock and sissybar bolts. It deserves repeating...PERFECTLY. 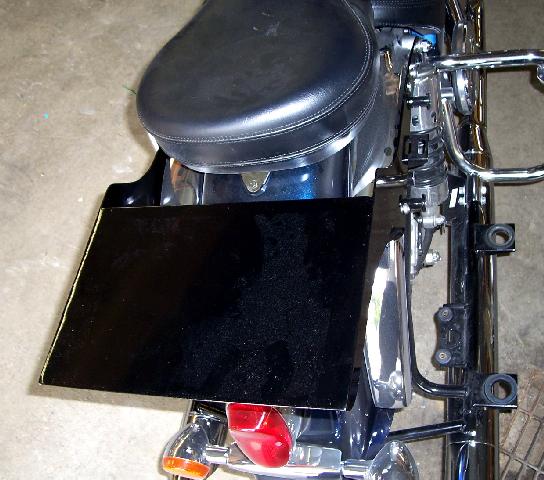 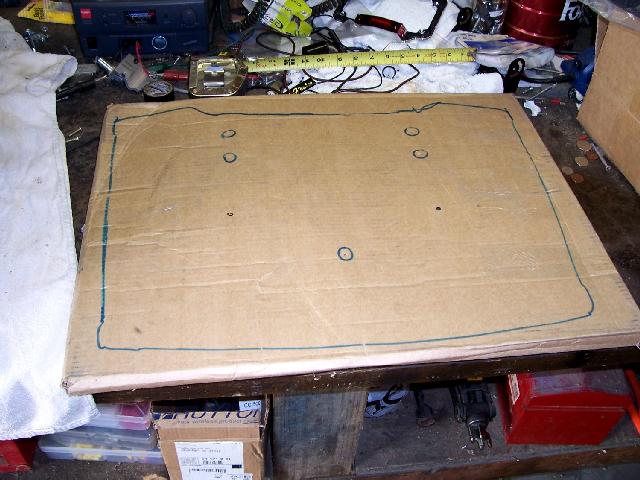 I tried to set the Tour Pak on the mount and mark the holes but it wasn't going to happen. The big tour pak kept slipping around. Instead I made a cardboard template. 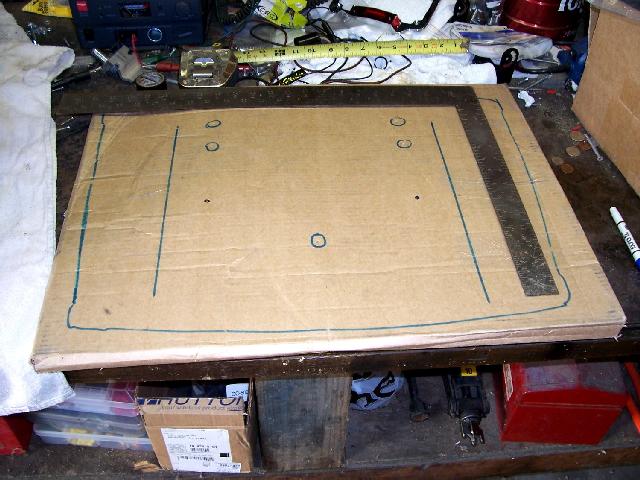 The tour pak holes are 10" side-to-side. The Wompus rack is 14" wide. I marked the edges and cut out the template. 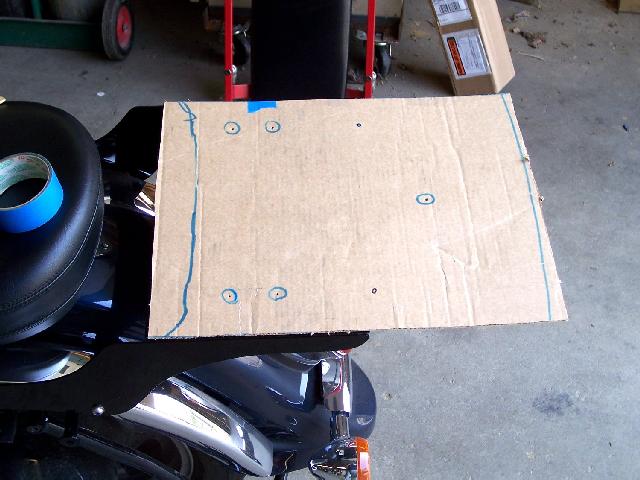 I had my girlfriend sit on the bike to see where the tour pak needed to go. You gotta keep the women happy.

In its final location the back three holes I planned to use were off the mount. 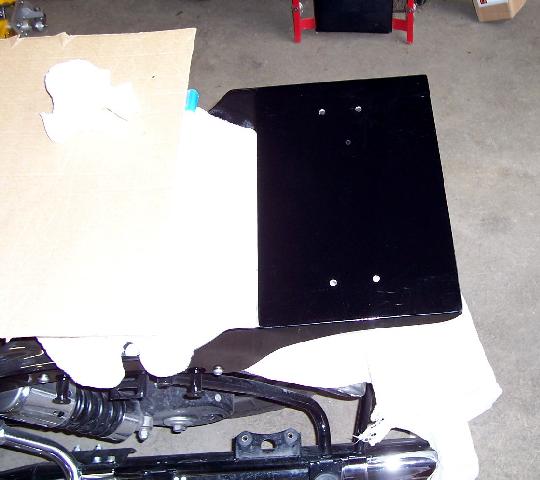 I drilled the first four holes... 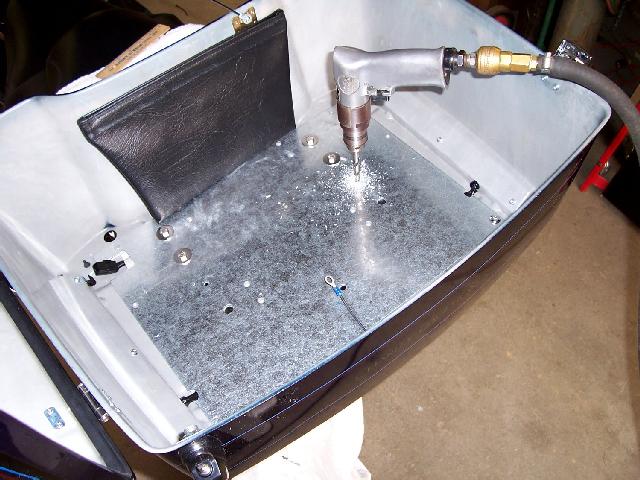 ...then mounted the pak and drilled two more. 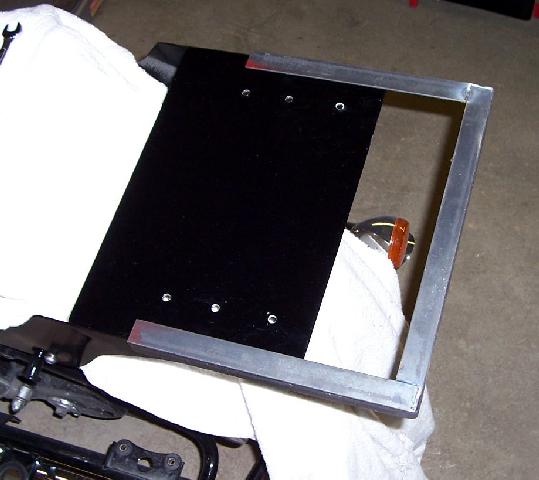 This left the back half of the tour pak unsupported. I bought some 1" angle iron from Lowes and fabricated an extension bracket. This will support the centered rear hole in the tour pak.

Update January 2011 - Received an email from Wompus today. He now makes an oversized 14"x14" rack just for the Nomad for the same price. 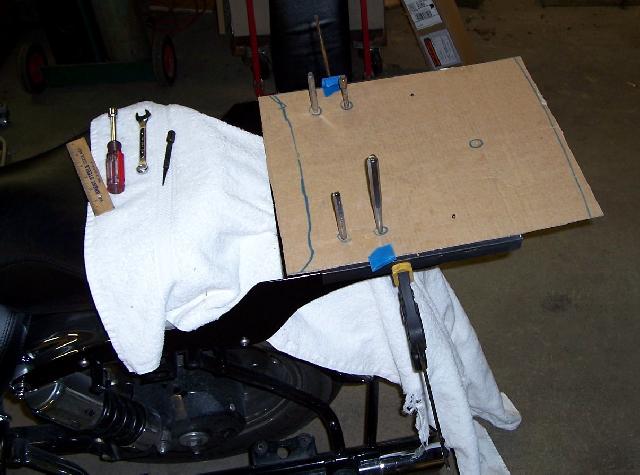 I used the template to position the extension bracket then drilled holes. Next I cleaned up the welds and painted the bracket. 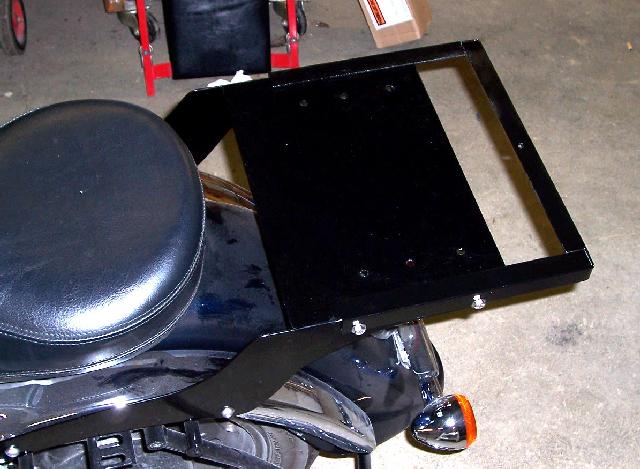 The extension bracket is bolted in place.

I put some liner under the tour pak. 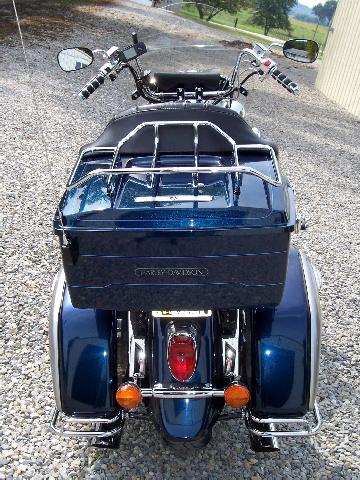 Here is the finished product. The color match is almost perfect.

I'd like to find some LED lights for brake and turn signals. I bought a Harley light housing on Ebay, but after I received it I realized there would have to be a lot of cutting done to make it fit (I thought it bolted on). I didn't want to cut up my new tour pack so I put the light housing back on Ebay. 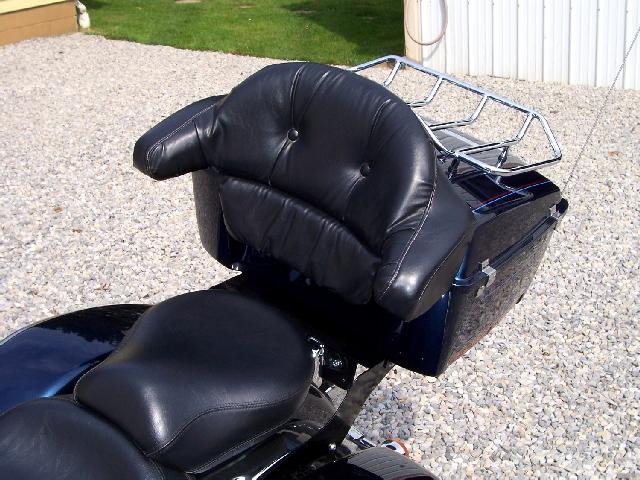 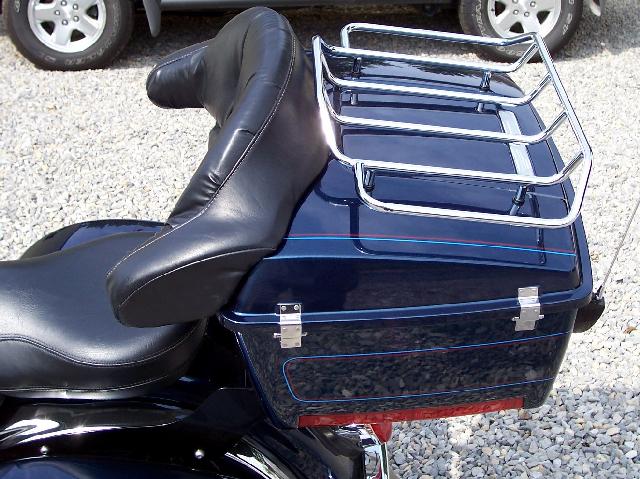 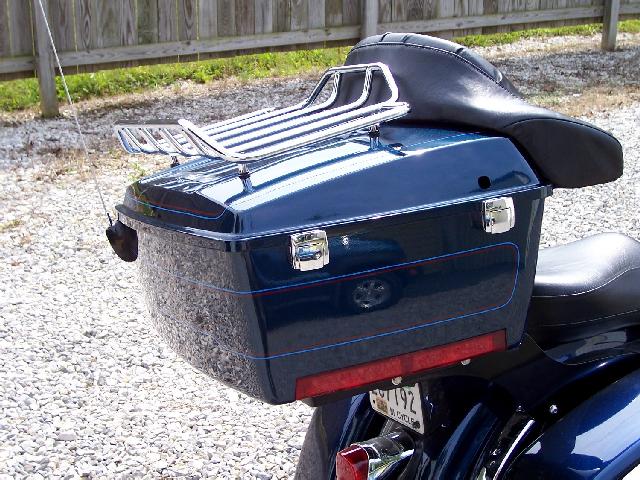 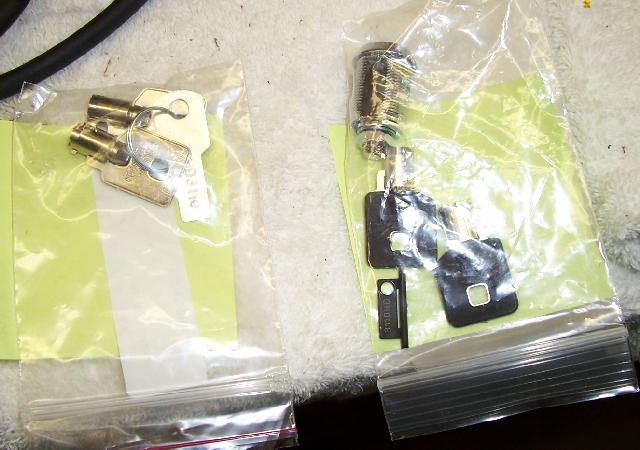 When I ordered the lockset from the Harley dealer they said the lockset didn't include keys, so they ordered two keys at $10 each. On the right is the lockset...WITH keys!! 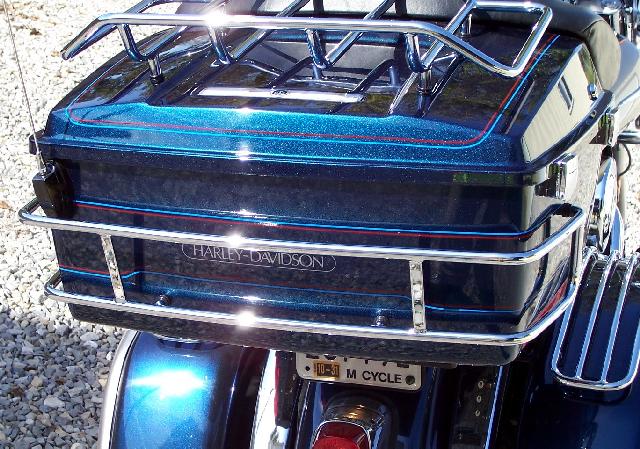 I purchased a chrome bumper for the tour pak. I have some LED lights ordered. 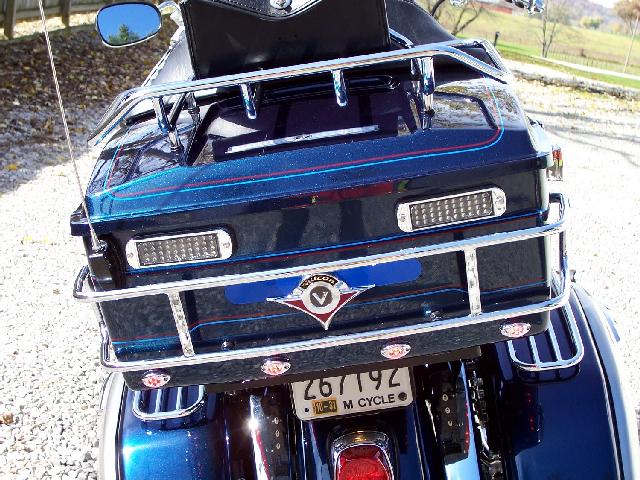 Here is the finished trunk. LED marker lights on the bottom. LED turn/brake lights on the top. I put a strip of blue reflective vinyl over the 'Harley Davidson' then put a Vulcan emblem on that.

The turn/brake lights are made by Showme that I got from LSH lights.
The marker lights are from KMT Service Parts.
The Vulcan emblem came from Bike Bandit.
The reflective vinyl came from a local sign shop.